Longest January streak of above zero days in a while

As of January 22nd we have had 8 days in a row of days with above zero temperatures and the current forecast is for 4 more.  If we get to 12 days it will be longest streak of above zero days since we had 13 back in 1944 from Jan 19 to 31.


Considering that April was the only colder than average month during the year, it is not that surprising that 2016 came in as one of the warmest we have seen in the 100 years of weather records in the region.  Overall the average temperature was 8.69ºC putting it behind only 2012 and 1998.

The year started off in the middle of the very warm winter of 2015-16 resulting in the first 3 months being all warmer than average, this included a high temperature of 14.2ºC on the third of February which was the highest February temperature we have seen in the region.

Things turned around in April with the only colder than average month of the year that was also the fourth coldest April in the region’s weather records.

The warm end of the Spring in May transitioned into the hottest summer we have had since 1955 and the third highest overall.  The 19 days above 30ºC during the summer contributed to the 27 we had in total for year, this is much more than the average of 8, but much less than the 49 we saw in 1955.

This then continued into the fall with September to November all coming in at over 2.5 degrees higher than average including: September being the warmest since 1959 and the fifth hottest overall and November the sixth warmest and the most days over 10ºC at 20.  But as we have seen a lot of warm Fall seasons lately, this Fall wasn’t that significant even these really warm temperatures.

As often happens there were wet and dry months during the year, for 2016 the year started with a few average months for precipitation.  Then March came in over twice as wet than average, but this quickly changed as for the most part it was a very dry summer.  It would have been historically dry if not for a 10 day period in August when almost 150 mm fell, this resulted in August being the 7th wettest all time.

As for snowfall, we saw 100.5 cm of snow since the beginning of January, which is about average for that time of year.  But the 75.5 cm in the second half of the year (mostly from December which saw almost twice the average for the month) put the total for 2016 of 176.0 cm which is above the annual average of 159.7 cm.

So the final story of 2016 is the overall heat during the year and how dry it was during most of the summer.  But there wasn’t a whole lot in terms of extreme events, in fact in the list of extremes that are listed on the next page there was not one that was exceeding during this past year (of course this will get harder as more data is added to the record, but usually we have seen at least one or two extremes every year).


(averages are calculated from 1981-2010 data for the Waterloo-Wellington Airport)
Click on the image below to see the temperature chart: 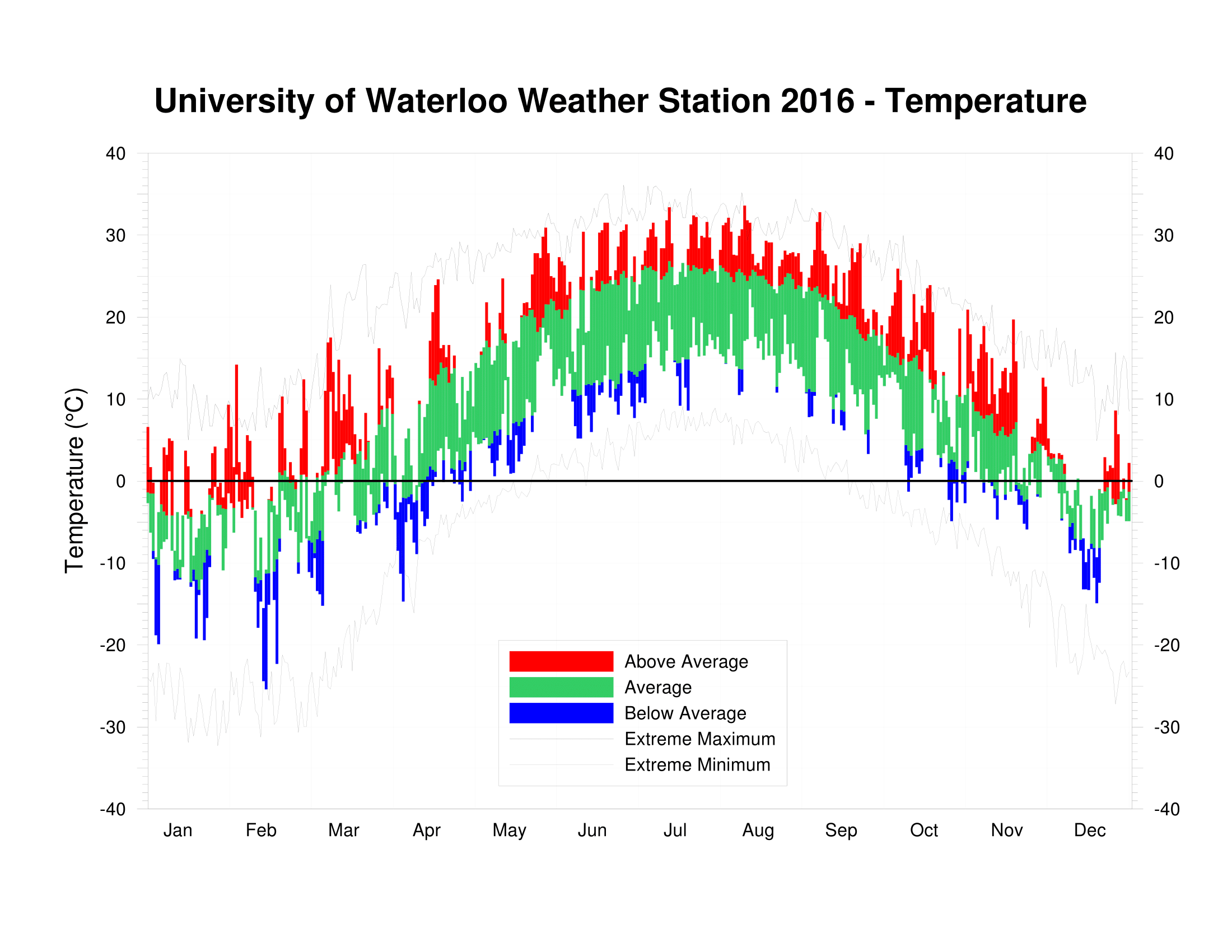 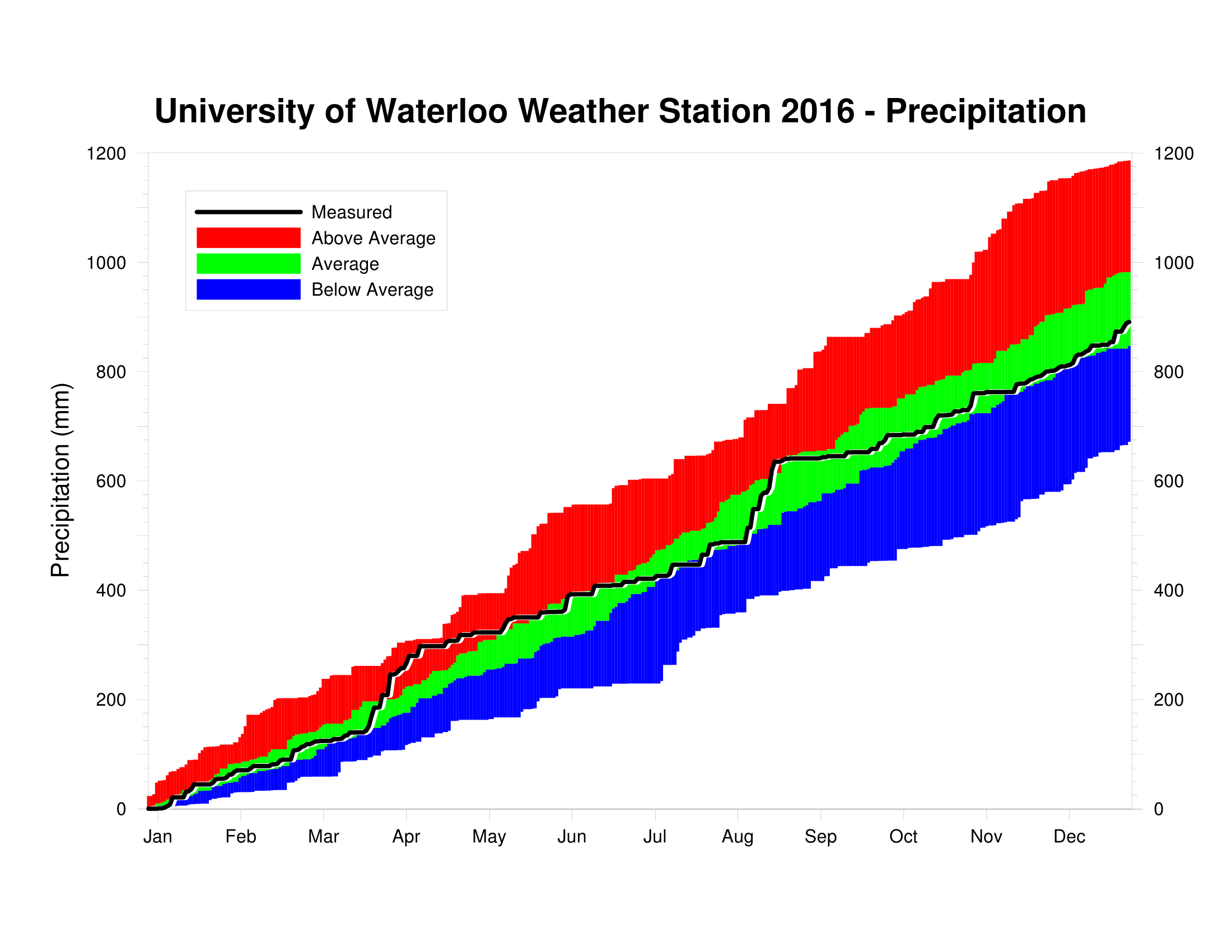 A wet and snowy December with average temperature

There was a much colder than average week in the middle of December that was offset by a warmer start and finish to the month, resulting in an overall temperature of 0.3 degrees above average.  This put the month within the average range for only the second time this year compared to 1 below average month and 9 above.

The precipitation was nicely within the average range for most of the month, but a few storms in the last week (including the rain on Boxing Day) resulted in the total finishing above average.  The total of 91.0 mm was well above the average of 71.2 mm. 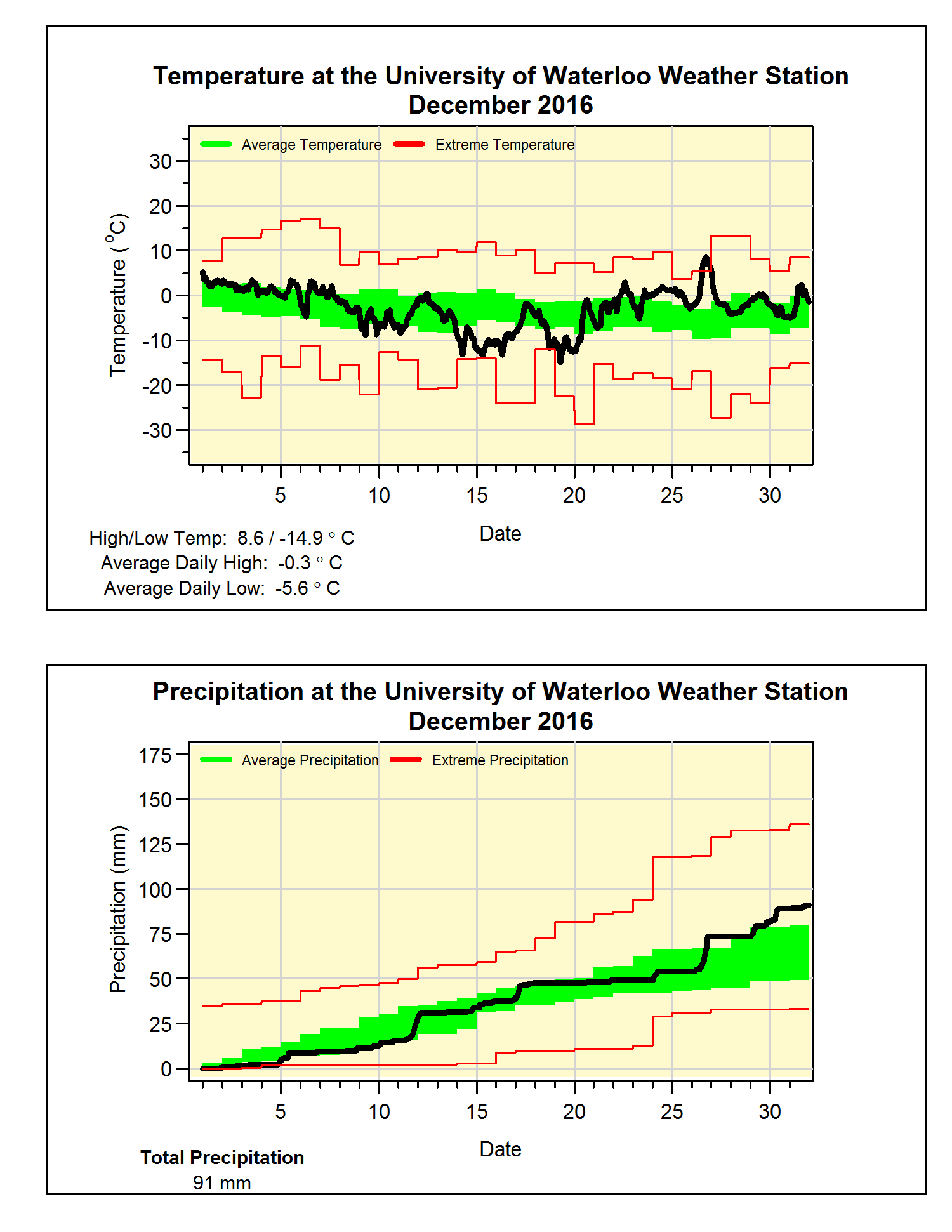