There weren’t that many individual notable moments during 2017, but what was notable was how many times there were consecutive days of interesting weather leading me to call this the “year of streaks”.  There is no official measure of streaks so it can’t be said definitively that it was the most ever, but it seemed like there were lots of them.

It started in January when we saw 12 days in a row that went over 0 degrees, this is something that we had not seen since 1944.  There were also a lot of days were the sun did not make an appearance, leading me to invent something called “dreary” days and there were more of these in January then in any other January in the history of the UW Weather Station.

The next streak came in February with another 12 days in a row above 0, something that hasn’t happened in the over 100 years of weather data in the region and leading to it being the warmest February we have seen.  Also notable was the high of 15.1°C on the 23rd which was the highest February temperature we have ever seen in the region, while in second place was the 15.0°C which happened the day before.

Then for only the 5th time in 100 years March was colder then February followed by a warm April and the see saw continued with a cold May.  The summer was generally very close to average with not a lot of really hot or cold days.

It wasn’t till the end of September that we saw the longest heat wave of the “summer”.  The most significant streak was the 15 days above 25°C between the 12th and the 26th, which is something we have never seen before in September.

In October there were 12 days where the temperature was over 20°C, we haven’t seen that many since October 1971.  But the most significant day was the 22nd when the temperature topped out at 25°C, this was tied with 1947 as the latest day of the year with a temperature above 25°C.

However, the cold temperatures came back with a vengeance in December, the coldest one since 2000, that featured a streak of very cold days at the end that went into the next year.  It was so cold that during the last 6 days of the month, the daily high temperatures didn’t even get above the average daily low temperatures for those days.

Overall the year was 1.1 degrees above average, making it the tenth warmest we have seen in the region.

The first half of the year was the second wettest on record, fueled by a very wet April followed by an even wetter May.  The rest of the year was more or less average with the final total of 988.6 mm coming in just within the above average range. 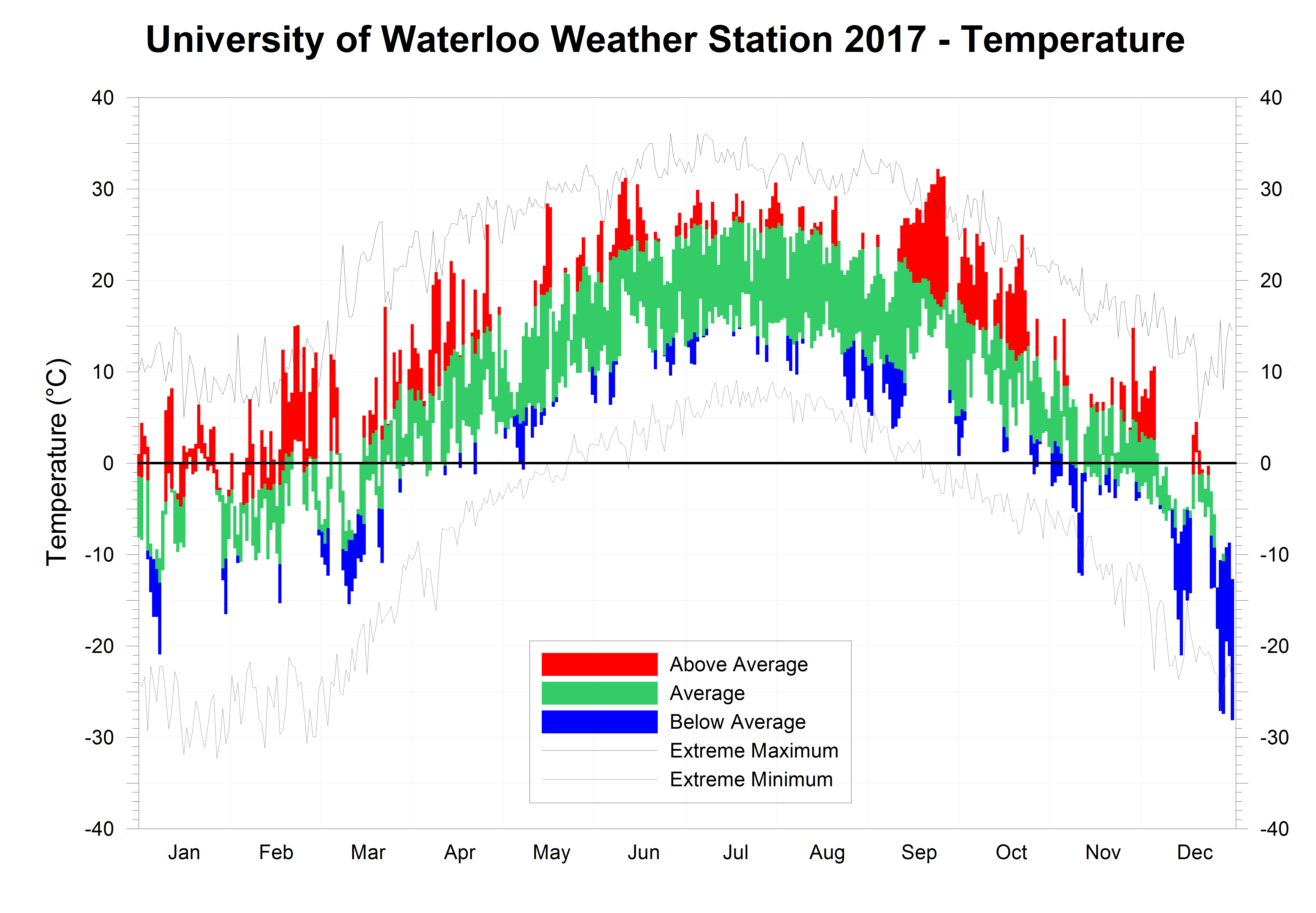 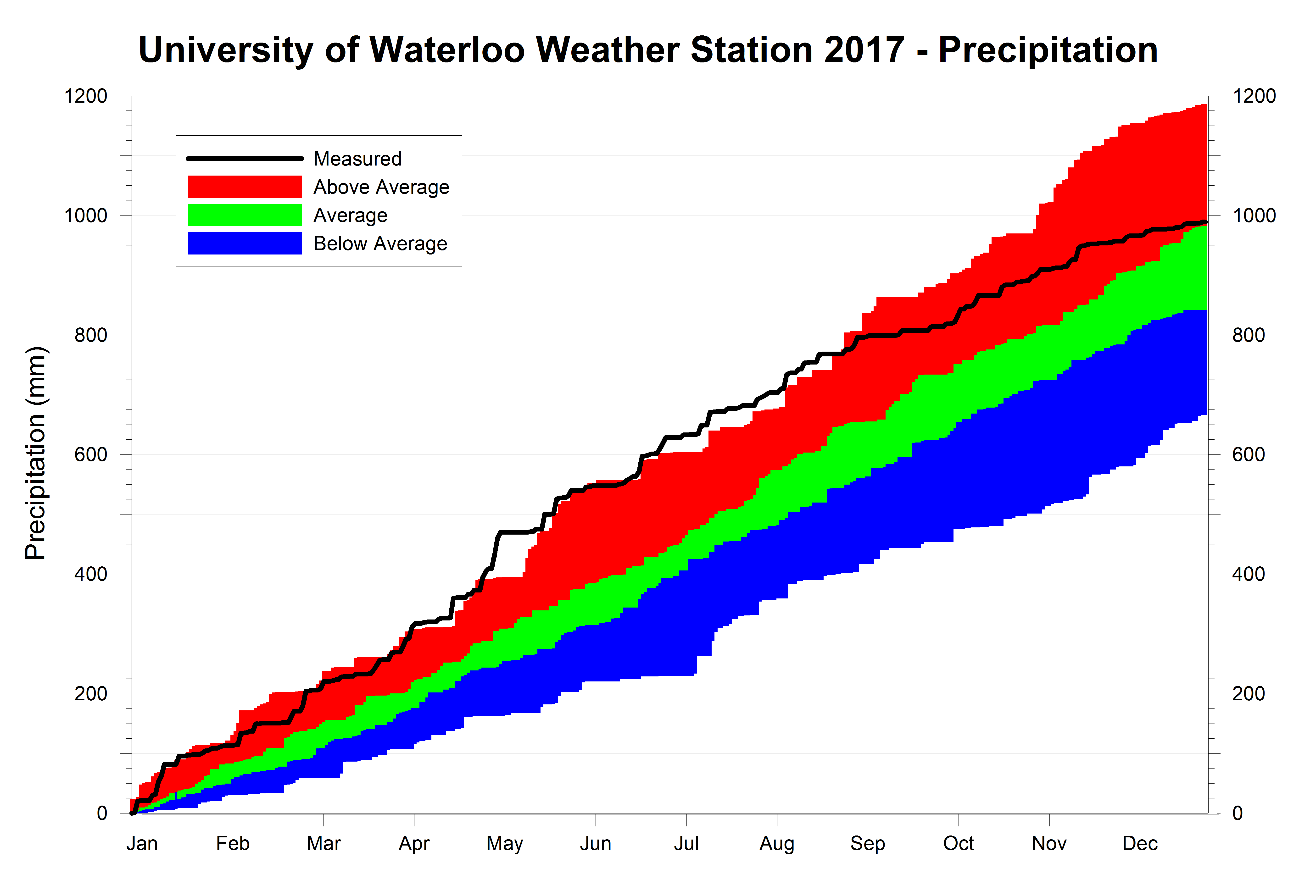 
A cold and dry December

For almost the entire first week, December was pretty warm with some double digit temperatures, however things then got somewhat colder before getting really cold.  So cold that during the last 6 days of the month, the daily high temperatures didn’t even get above the average daily low temperatures for those days.

Overall it was a bit more than 3 degrees below average making it the coldest December since 2000, while the cold streak at the end of the month might turn out to be one of the longest we have seen in the history of records in the region (but more on that next month).

The colder temperatures meant that most of the snow that fell remained on the ground at the end of the month.  However, this might have masked the fact that we didn’t get that much precipitation during December with only 32.0 mm compared to the average of 71.2 mm.

As far as snowfall, we had 31 cm which was just a little less than the average of 37.2 cm for the month. 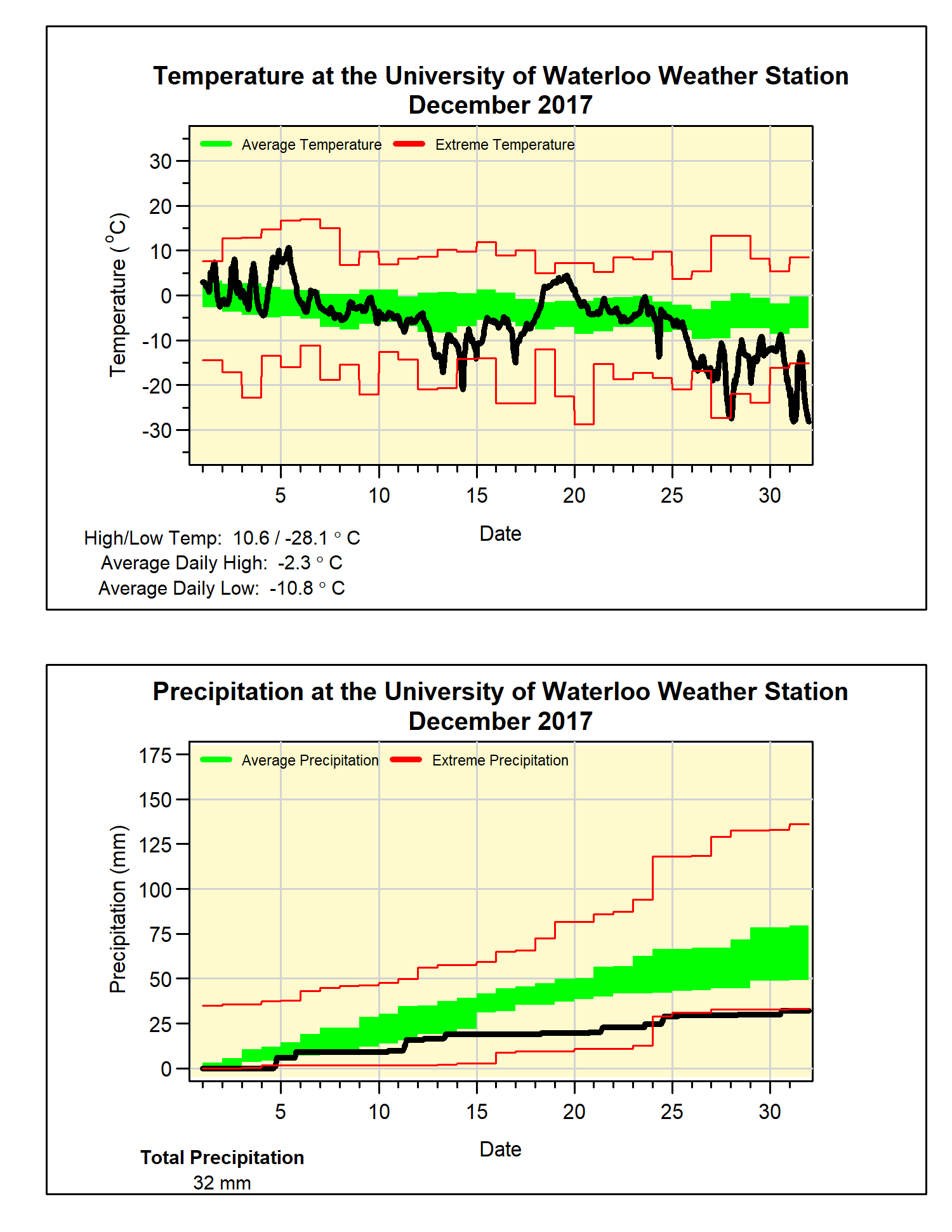