Missing Seasons Alert!
If anyone knows the whereabouts of the Spring and Fall of 2018
please contact the UW Weather Station

Although this is a bit of an exaggeration, the year 2018 saw a rapid transition both between colder and warmer temperatures in May and then back again in mid-October.  Typically, both the Spring and Fall see times when the temperatures will swing between warmer and colder episodes, but this year it seemed like the transitions happened within a day.  It is hard to quantify just how unique this is, but by looking over the temperature graphs from the past 10 years I couldn’t see anything like it.

The year started out really cold, in fact the coldest temperatures of the 2018 occurred in the first few hours of the year on New Year’s Day.  These were followed by days with lows in the minus 20s, however just a week later there were days with highs over 10°C.  This oscillation of temperatures continued into February and included the high of 15.6°C on the 20th which was not only the highest February temperature in over 100 years of weather data in the region, it was also the highest temperature we saw until April 12th.

Then came a good example of weather whiplash, with April setting the record for the coldest April in the region’s records followed by May which was the warmest.  Summer really started in May, a month which saw 8 days above 25°C (something that has only happened one other time during May) and another streak of 3 days over 30°C.

But the real heat was still to come, as August was almost 3 degrees higher than average and the second warmest in the past 20 years.  This was followed by a September that was 3.5 degrees higher than average (the 5th warmest in the historical record) and gave us one heat wave with 5 days over 30°C followed by a second one with 5 more days that were over 25°C.

All this heat came to a crashing halt in mid-October with temperatures dropping by 10 degrees after the 12th.  The cold continued in November, which was the coldest since 1996 and the 5th coldest in the region’s history.  This colder pattern continued into mid-December after which we saw a bit of a warm up, resulting in the overall December temperature coming in at 2 degrees above average.

As for precipitation, the first few months of the year were wet with only March coming in drier than average.  One highlight was a period of 3 days in April with 72.6 mm of precipitation, which is almost as much as the average for the month.  This wet start to 2018 turned around in June which saw 12 dry days and a dry first half of July.  This brought the total for the year back into the average range where it pretty much stayed for the rest of the year except for a wet few weeks at the end of October.

The final total precipitation for 2018 of 950.1 mm was only a little over the average of 916.3 mm and well within the average range. 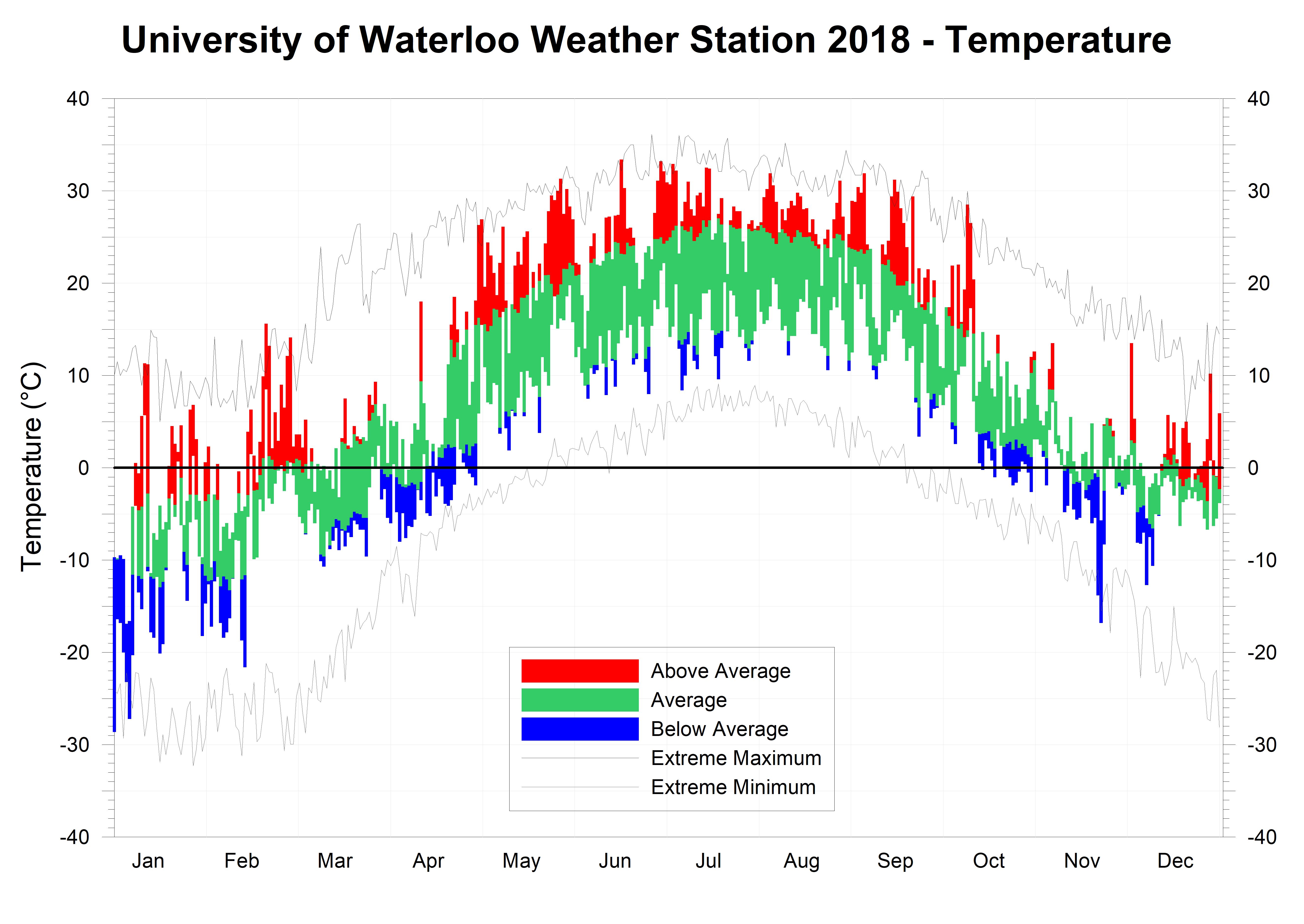 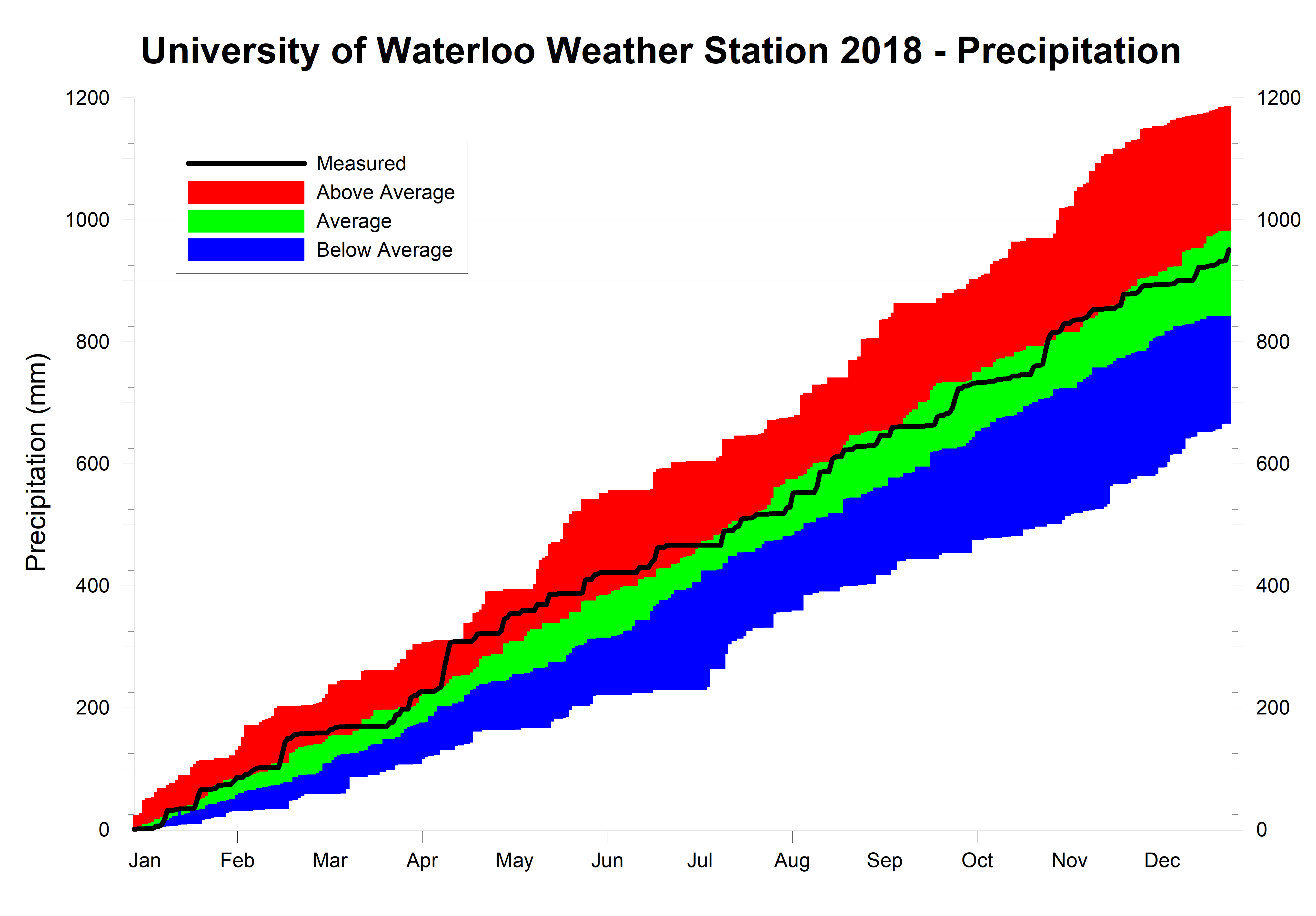 
A warm December with average precipitation and low snowfall

After a start to the month that was a bit colder than average (except for the 2nd when it shot up to 13.5°C, the high temperature for the month), it was generally a bit warmer than average for the rest of December.  The overall average temperature came in at 2 degrees above the average.

A very rainy last few hours of the month pushed the total to just a half a mm above the average of 71.2 mm.  It shouldn’t be surprising with the higher temperatures that December only saw 11.5 cm of snow, much less than the average of 37.2 cm for the month. 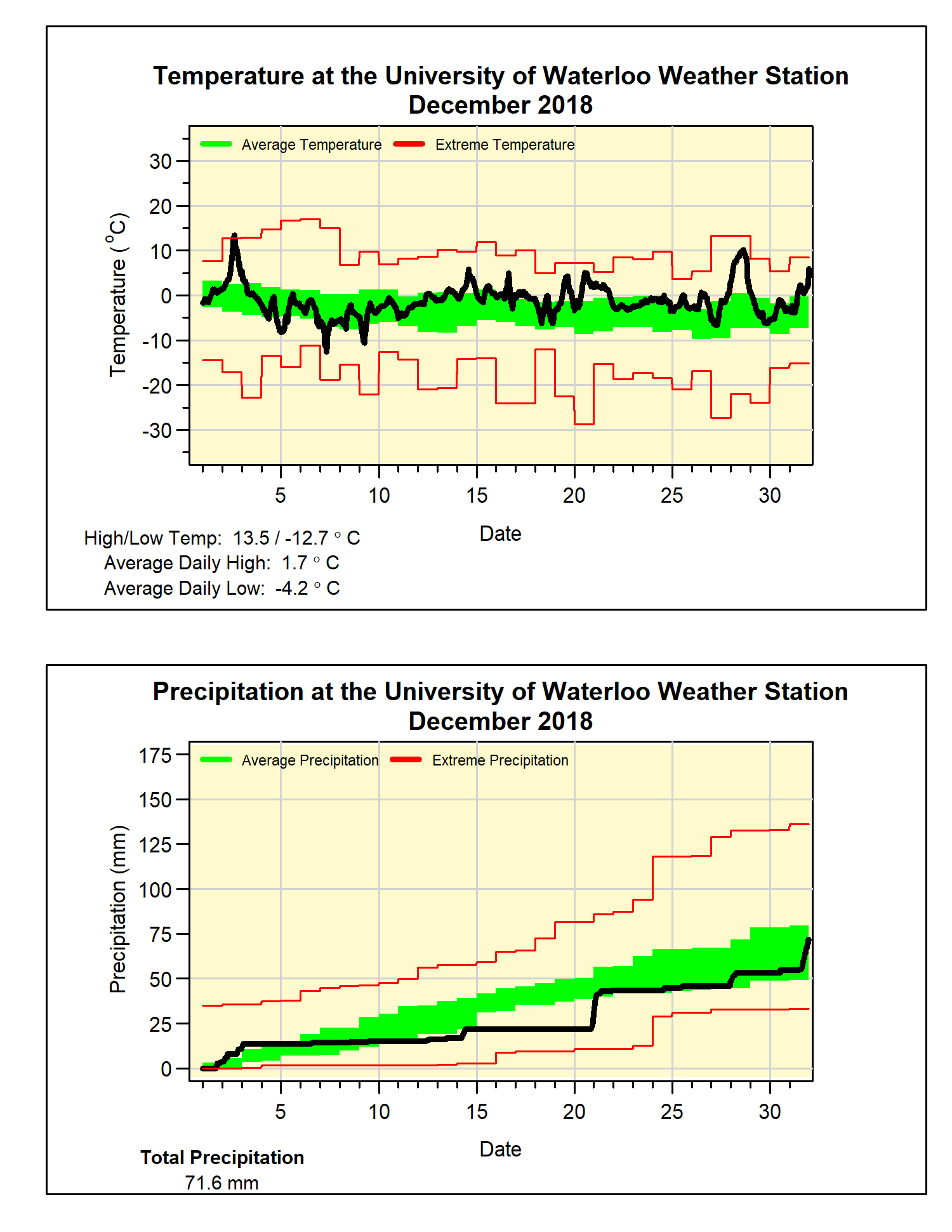