Another warm September with average precipitation

I know it seems that every September I talk about how consistently warm the month is compared to the other months of the year.  Well it turns out it is not just my imagination, here is a map (albeit for the US) of which month has warmed the most in the last 30 years:

and you can see that around the Great Lakes that month is consistently September.

Although we saw some cooler temperatures, the pattern continued as the overall temperature was 0.8 degrees above average.  There were some cold nights during the month, but these were offset by almost a week that got to the mid-20s at the end of the month.

One of those cold nights happened on the 19th when the temperature actually went below zero for the first time since the spring.  This is the earliest it has happened in the 22 year history of the weather station and the coldest September temperature since September 30, 1993.

And now a riddle: What is wet on both ends and dry in the middle?

For the year so far, we have seen 753.7 mm of precipitation which is above the average of 683.5 mm for this time of year. 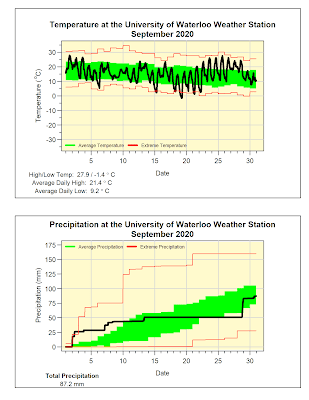 Is it correct that the low for the month was in fact a historical record low that that date in Waterloo? I am surprised that you didn't mention it.

At the Waterloo International Airport weather station a few km away from U of Waterloo, a new daily record minimum temperature of minus 2.6 was set on the morning of 19-Sep. In fact it was either the coldest or 2nd coldest astronomical summer temperature ever recorded at that site. The records there go much further back (to about 1970 for daily max/min data0 than at U of Waterloo. So a daily record low at U of Waterloo would be statistically less significant due to the short period of weather records there. Just my opinion.