A very warm November that was a bit drier than average

What a difference a year makes, last year was the coldest November in almost 25 years and this year it was the warmest in almost 10 years.  Overall, it was more than 3 degrees above average, almost 6 degrees higher than last year, and the 5th warmest November in the over 100 years of weather records in the region.

This was a result of a week of record breaking temperatures at the start of the month.  The records that fell include: the high on the 9th of 23.9°C was the second highest November temperature for the region (highest was 25.0°C on Nov. 1, 1950), we had 4 days in a row over 20°C which was the longest such streak in November, and finally the 8 days in a row above 15°C beat the previous longest streak of 7 days.

There were only a few days with any significant precipitation scattered throughout the month, which resulted in a total of 61.4 mm, putting it just below the average range.  The total precipitation of 886.5 mm is above the average for this time of year of 832.9 mm, and with only one more month to go in the year, unless December is very extreme we will probably end year with close to average.

The total snowfall of 22.5 cm was quite a bit more than the average of 13 cm for November. 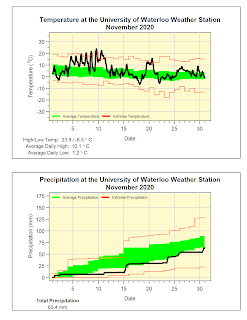